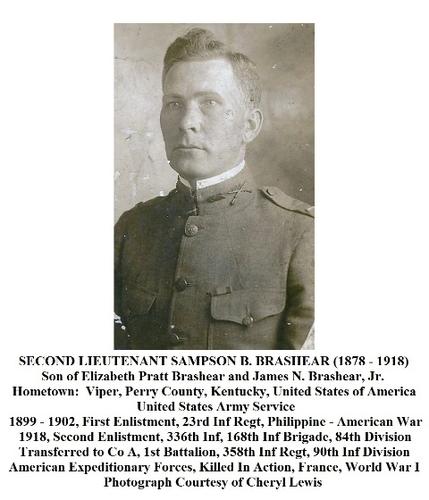 who was awarded a Silver Star Medal for Action Taken on The Fourth of July in France,

Somewhere in England
Sunday, Sept 22, 1918
Mr. W. M. Cornett
Viper, Kentucky
Dear Brother:
Have been so busy enjoying the voyage and life in general, that I have not taken the time to write a single letter since I left America, although I am still enjoying as much as ever and find this one of the most pleasant days of the whole journey.  I feel I should not be so selfish in my own pleasures as not to write and tell the folks at home at least something of our wonderful trip over the sea.
There are many things in connection with it that were of interest that I cannot write, as it would be violation of censorship, for I realize the purpose and importance of a strict censorship.  Let me assure you that the censorship is not for the purpose of preventing the people from knowing what is happening or has been happening, but for the purpose of preventing talk or information to the enemy that would be of advantage to him.  Many things were of such interest that will keep till the war is over and such time as there will no longer be military secrets.  Then I hope to have the pleasure of telling them to you at my liberty and leisure.
In all my wanderings I have spent exactly 300 days on the seas, and on no previous voyage did I ever find ocean travel so interesting or pleasant as this trip has been, nor have I ever felt so safe in any previous long voyage as I did on this one.  Before the voyage was ended I found myself hoping that we would encounter a submarine.
I have seen a bit of Ireland and Scotland and considerable of England, and I am wonderfully impressed with the beauty of these old countries, especially their verdure at this time of year.  England seems just a continuous succession of gardens with birds and flowers on every hand.  I think we are very fortunate in getting a few days rest in England.
I don’t know whether it is because of my wanderlust nature or not, but I have been happy from the time we left Camp Sherman to this very hour.  I am looking into the future optimistic in the belief that this world catastrophe is going to end happily, not only for us Americans, but for the whole world (the Hapsburgs and the Hohenzollerns excepted) and that the condition of the world as a whole is going to be better after the war has ended than it was before the war began.
I will be too busy to write many letters, so if anyone is interested in hearing what I have to write from Europe, you may pass this letter on to them.
Sincerely yours,
SAMPSON B. BRASHEAR
Censored by S. B. Brashear,
2nd Lt. U. S. A.

~~~~~~~~~~~~~~~~~~~~~~~~~~~~~~~~~~~~~~~~~~~~~~~~~~~~~~~~~~~~~~~~~~~~~~~~~~~~~~~~~~~~~~~~~~~~~
In France
Oct. 8, 1918
Dear Miss Sampson:
Have just received your card and am flattered at your great expectations of the 336 Inf.  Hope we will live up to your expectations for various reasons.  First that the war may soon be over, and for the glory of our organization and last but not least for that home coming and picnic and parties ‘n’ everything.
But listen, we will have to get interested in some other organizations.  I will leave the 336 Inf. tomorrow.  Nearly all the men and a few officers are going.  Two hundred from our company are going, and I am the only officer going with them.  You see I am going with the majority and it looks as if I would get to the front before the 336th Inf does, for we are leaving the regt again practically without men.  I don’t know just where I am going but I think I will go into an organization that has been in the thick of the fight and lost a lot of its men.
Have been in France two weeks and am enjoying the comforts of what they call “rest billets”. I know what a billet is by now but I have not known what rest is since I arrived.  But I am enjoying life and enjoying my work so why should one want to rest in these strenuous times.
My trip across the water was so pleasant that I was so engrossed that I did not stop to write anyone about it and now since I have reached my “rest” billet I have been to busy to write.  We had a wonderful trip from an Atlantic port to our billet in France.  The things that interested me most I am not permitted to relate.  Not to prevent the American people from knowing what is being done and how it is being done, (but) to outwit the craftiness of the enemy, but that the knowledge we have may not become the knowledge of the enemy and that no information may be disseminated that might come into the hands of the enemy and be of advantage to him.
Many things were of such interest that they can be easily remembered till after the war is over and then I hope to have the pleasure of relating them at my liberty and leisure.  In all my traveling I have spent just three hundred days aboard ships and never before did I enjoy a long voyage as I enjoyed this one, (didn’t even get sea sick tho the sea was rough) nor ever do I expect to make another voyage so interesting.  I felt safer than I have ever felt before on a voyage of this distance.  Before the voyage had ended I found myself secretly wishing we would encounter a submarine.
I have seen a little of Ireland and Scotland and much of England and France and I find these old countries to be wonderfully beautiful.  Everything is still fresh and green and the country presents the appearance of a continuous succession of well kept gardens.
We are “billeted” (that is quartered in barns and houses) along the country-side in southern France.  Lt Reeves and Lt Bryant are not going with me, and perhaps only one or two former 336th officers will be with me in my new organization.

On November 11, 1918 in Compiegne, France, the Armistice Cease Fire Agreement was signed to start negotiations for the signing of a peace treaty to end World War I.
Unaware of Brashear’s death, the following two transcribed World War I letters were written by Virginia Page Sampson to 2nd Lt. Sampson B. Brashear.  After arriving in France, the envelopes were marked DECEASED and returned to Virginia Page, who placed the unopened letters in a place of honor in memory of a friend lost in the Great War.  Sixty-seven years passed before a collector obtained the letters, broke open the seals and read the words meant for another.
~~~~~~~~~~~~~~~~~~~~~~~~~~~~~~~~~~~~~~~~~~~~~~~~~~~~~~~~~~~~~~~~~~~~~~~~~~~~~~~~~~~~~~~~~~~~
Nov. 13 - 1918
Dear Friend-
Do you think that I have fallen off the ends of the earth.  Well – I haven’t.  I might ask that about you.  I wrote to you last, but maybe you didn’t get my letter.
You should have seen the excitement the peace news created over here.  The peace bells certainly sent thrills through us.
We will have several things to be thankful for this year – namely – we’ve had fine weather for the crops, the flu ban has been lifted and peace has been declared.
Won’t it be a grand Christmas this year.  I do hope you will have a nice one.
There is some talk about sending the boys in training here, over to relieve you all so that you may come home.  Won’t it be good to set your foot on American soil once more.
Lets hope it won’t be long.  Do write to me soon.  Heres wishing you a very Merry Christmas and a Happy New Year.
Sincerely your friend
Virginia Sampson
344 Peterson
Louisville
Ky.
U.S.A.

Nov 21, 1918
Dear Friend –
I received your most welcome letter last week.  I wanted to answer it right away, but I have been so busy.  Now that the war is over we have more work than ever.
Won’t it be grand when you all get back?  It will not be so very long before we can have our long looked forward to party will it?  - and a grand home coming it will be too.
I wrote you a letter and sent it to your old address.  I do hope you get it.
Saturday there is to be a big liberty parade in town.  Everyone is going to be in it.  I don’t believe there will be anyone to watch it except me.  I am going to watch it.  I’ll have to write and tell you all about it.
Just lots of the boys over here are being discharged from the army and those graduating from the O.J.S. are being put on the reserve.  Everybody here in Louisville seems to think that we will have to clean up Mexico before we are through.  I do hope we won’t.
The flu has started up here again but it is in its mildest form.  I hardly think the health authorities will close things up again.  We haven’t had any cold weather to amount to anything yet, perhaps that might stop the flu.  But we might just as well live down by the equator – almost.  I’m afraid we won’t have snow for Christmas.  Won’t that be awful?  I do hope you have a pleasant Christmas this year.  The whole Sampson family will be thinking about you on that day and wishing you a very Merry one.
Elizabeth sends her regards.
Your friend
Page Sampson
~~~~~~~~~~~~~~~~~~~~~~~~~~~~~~~~~~~~~~~~~~~~~~~~~~~~~~~~~~~~~~~~~~~~~~~~~~~~~~~~~~~~~~~~~~~~
In his article, “Searching For A Soldier,” Kenneth C. Wukasch wrote, “In 1985, my wife, Janice accompanied my mother to a fund raiser being sponsored by a local retirement home in Georgetown, Texas.  On one of the tables Janice noticed a packet of World War I letters stuffed into a plastic ‘baggie’.  She bought the letters since she knew that I collected memorabilia from World War I and World War II.”
Janice and Kenneth Wukasch were in possession of two WWI letters written by Second Lieutenant Sampson B. Brashear and two letters written by his friend, Virginia Page Sampson.  Years passed before Mr. Wukasch identified the soldier of mystery, by finding 2nd Lt. Brashear’s name, hometown and photograph in the book, Soldiers Of The Great War.
In 2003 Mr. Wukasch placed a notice in the Hazard newspaper in Perry County, Kentucky, announcing his wish to share information concerning 2nd Lt. Brashear.  After he received responses, he decided, who should be the next caretaker of a piece of our history.  The precious World War I letters were returned to Frankie Lane Campbell Roberts, the daughter of Anna Brashear Campbell, who was the sister of Second Lieutenant Sampson B. Brashear.
~~~~~~~~~~~~~~~~~~~~~~~~~~~~~~~~~~~~~~~~~~~~~~~~~~~~~~~~~~~~~~~~~~~~~~~~~~~~~~~~~~~~~~~~~~~~ 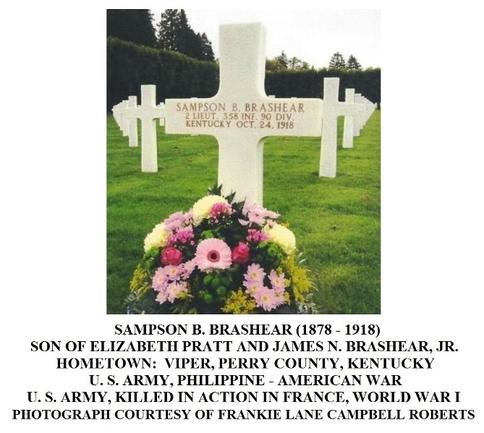